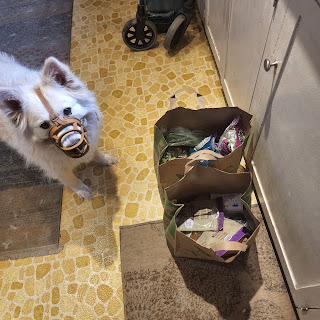 "Dad, what do you mean that they were out of turkey hot dogs AND liver sausage? Isn't there someplace you can call to complain? What are you going to hide my pills in?"
Posted by White Dog Blog at 5:33 PM No comments: 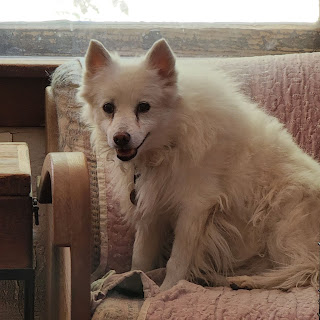 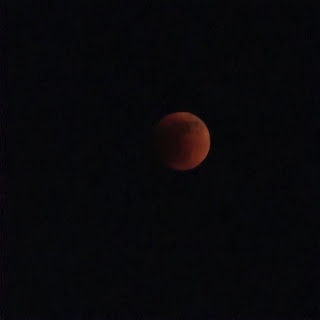 "Dad, are you SURE you want to go out there? The moon is bloody and it is extra dark. You want to take photos of it? Seems like it might not be a good idea...you know, like bad luck or something. No, I don't think I want to go out with you but I will watch you from the widow; don't stray out of my sight." Opal positioned her bigger sisters and Roman so they could rush out if her dad needed defending.
Steve' s result of the dramatic total lunar eclipse which coincided with a super moon, when the moon was at its closest point to Earth and reflected a red and orange light. "For once," Steve said as the Army looked at his shots, "it was a perfect night without clouds to block the view."
Posted by White Dog Blog at 4:47 PM 1 comment: 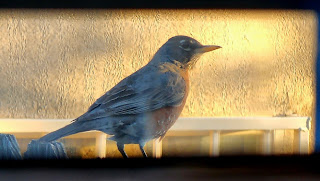 "Lilly, come and look out of the window. We have a little visitor, actually a soon-to-be neighbor, making a nest in the tree right outside of the office," Steve encouraged her. She was not as curious as he had expected. 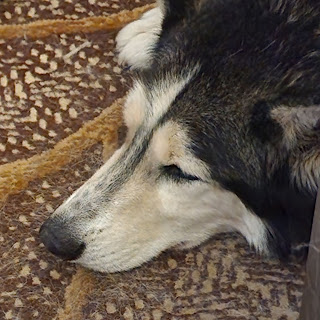 "Really, dad. unless the birdie is delivering creamy coffee or second breakfast I would rather not leave this comfy spot under the breeze. Show Diva if you don't mind forty minutes of her 'talking' to the poor creature. She can sit in your lap."
Posted by White Dog Blog at 5:48 PM No comments: 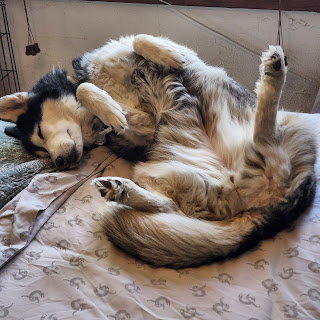 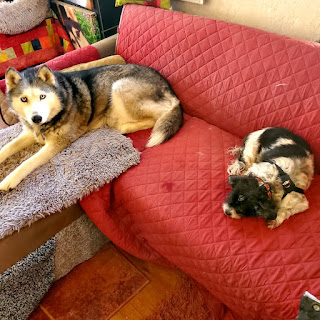 Diva, self-appointed Protector of the Realm, since discovering a cat under our car one recent bedtime walk has been on constant alert for new intrusions. And her determination has found a mark. The new nemesis to hold at bay with her obsessive warnings and threats is the quiet little cat that seems to live on the second floor of the apartment building behind our yard. The cat can be seen peering through its patio door and sometimes that same door is left ajar so that kitty can sit on the balcony.
Diva never tires of dashing out to the yard if she senses the cat is visible and standing face craned upward to sing a forceful aria meant to instill terror. The cat just stares without reaction. This seems to provoke Our Girl to even higher notes and longer trills.
I know when Bailey comes to look at me that it is time to call in the POTR...which she ignores. "Bai," I ask my peacekeeper, "would you do us and the entire neighborhood a favor and herd your sister back inside?"
I do not know the words she uses but they are magic. Diva follows her right inside through the dog door. They both take long drinks of water and then settle down to catch their breaths. Later Bailey comes over for a momma hug and the silently slipped "Thank You" cookie.
Posted by White Dog Blog at 7:44 PM 3 comments:

"If anyone asks," Lilly told Roman, "the empty tissue box is here to be added to the composter." 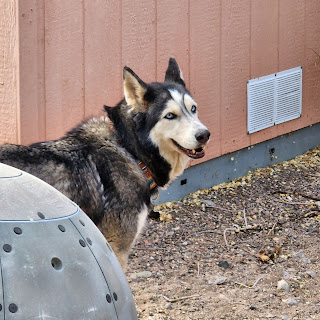 "You are the Kween of Kleenex," Roman responded. "You don't have a chance of convincing anyone that the box was empty and you were just cleaning up . But I won't say a word." 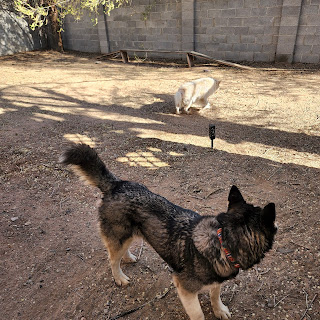 Posted by White Dog Blog at 9:43 PM No comments: 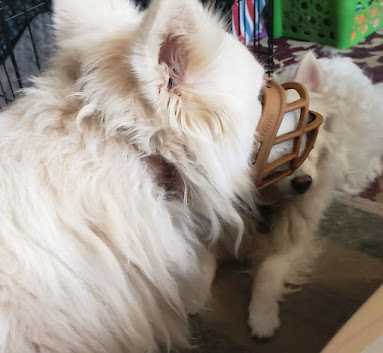 Opal was awake and watching her brother before he even opened his eyes this morning. Last night, she waited until Roman was comfortably settled and nodding off before finding her usual spot in the doorway. "Don't worry, momma," she whispered. "I am going to be his special nurse. Together we will get him back to health."

In the afternoon I called Opal to my side during my conversation with Dr. Julia. Roman's bloodwork was in and she shared the results. "All the numbers look good except his white blood cell count which is high because of the infection in his lungs. The antibiotic will clear that up. I will need to see him in two weeks to recheck that he is clear." Opal high fived me. "Liver, pancreas, kidneys, all the organs are good as well. His sodium is slightly elevated so watch and reduce any salt he might get." I told her that we are pretty salt aware here because of MY health but promised to check treats. "It may just be that all the diarrhea has left him slightly dehydrated. Try and get him to drink more water." We agreed to check again in two weeks when she did a recheck and if he still was running high we would reassess.

When we got off of the phone, Opal ran off to tell Roman the good news and I filled in Steve and the rest of the White Dog Army. 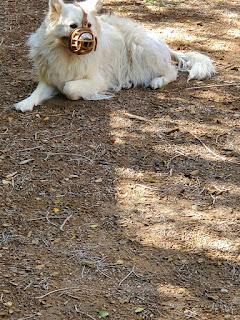 "When she joined the White Dog Army, we discovered Lilly is a slobbery drooler. Now EVERYpup drools like a St. Bernard with long strings of saliva," I told Dr. Julia after she explained that the brownish stain around Roman's lips was a result of his saliva and food sitting there. She laughed. "Mine, too, AND my cat. Maybe we missed the memo." 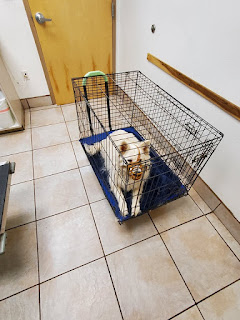 Roman suffered through the weekend with looseness. He was still eating but his backside was a mess, and he seemed to be running a slight fever. Today, Roman had a visit to Dr. Julia's office. When Steve dropped him off in his crate this morning and went over the notes/concerns, all the staff seemed delighted to see him. Steve thinks they are all especially tickled that he is so well-behaved and cooperative with them. "Still, please be careful," he told them as squeals of welcome continued following him down the hallway.

The WDA was not comfortable with Roman's absence. Lots of reassurances that he would return home this afternoon did not stop all five from crowding into the room when our healer called to fill us in. "He will be ready to come home after four," Steve told them.

Good news included that the flareup he had of his Lyme disease has passed and that he is not suffering from any arthritis caused by it. My poor boy does not seem over the explosive bowels, though. Dr. Julia told us his colon is still "pretty full." AND he is experiencing some fluid in his lungs that we will hope to fix with cephalexin and vetprofin.

Sadly, Steve's hunch that, even before living through the hurricane, Roman was mistreated gained validation as the Xrays revealed a collapsing trachea. "Very unusual in such a large dog so young unless he was chained or something happened," our vet told us. It is something we will note to watch.

"Your Boy has lost three pounds and is at 48 pounds, But he needs to lose more, especially with arthritis, likely a part of his future. No more Endless Happy Hour Treat times." This caused a flurry of reaction from the WDA listening in to the conversation.  "We gave him a shave down to keep his backside cleaner and trimmed his nails since we know he is not keen to let you do it. We sent the bloodwork out for tests; I should have results tomorrow afternoon and will call you."

"And yes, Roman was perfectly well-behaved. Let's think about scheduling a dental, and I can remove that little growth under his eye at the same time." 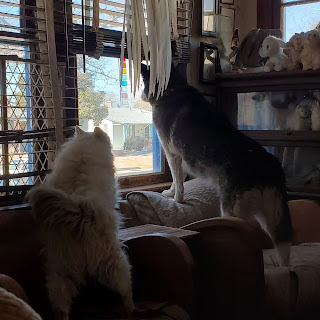 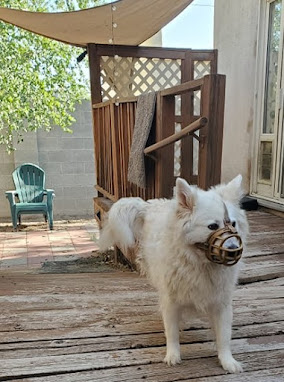 Posted by White Dog Blog at 7:50 PM No comments:

Of course, there was a special dessert, our...we mean, momma's...favorite: vanilla ice cream topped with almond butter and crunched up Chinese almond cookies. 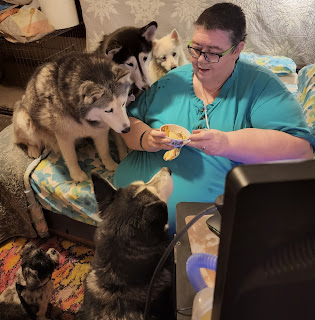 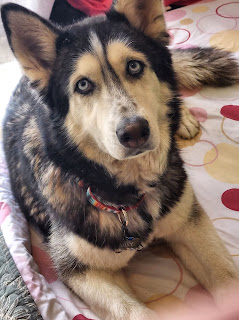 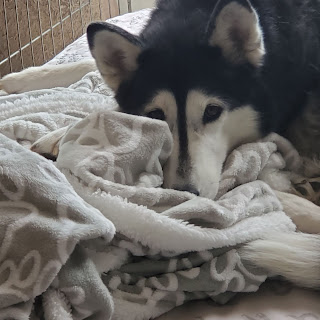 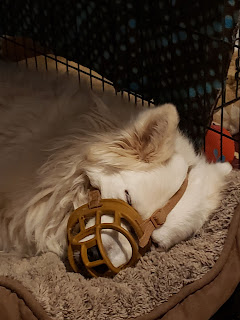 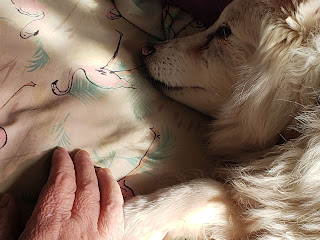 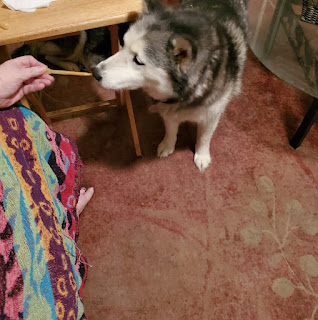 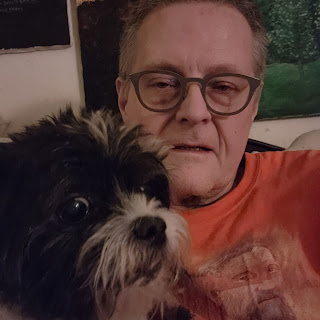 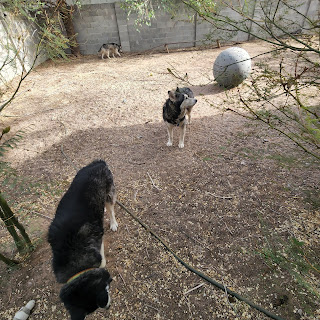 Saturday sticking to the shade stretches with the Sibe Sisters (after a marathon nap under the swamp cooler).
Posted by White Dog Blog at 10:28 PM 1 comment: