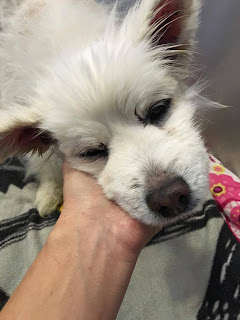 White Dog and the others gathered around the bed where Anya was cradled in pillows and blankets with an oxygen cannula in her mouth. She was non responsive and we were all preparing to say our goodbyes.

Last night our girl seemed to have an upset tummy as she had a few bouts of vomiting bile. We gave her pepcid and she settled to sleep. This morning Steve found her limp, unable to walk and gasping for air.

We knew when she came to us that she was very old, in pretty bad shape and that it was a good possibility that we were, in adopting her, providing end of life hospice. I held her as we made up space for her to be comfortable.

The oxygen helped relax her breathing but she was not here. Eyes closed, motionless, she seemed to be preparing to cross the Bridge. When you build an Army of seniors and those with health issues you go into auto-pilot to insure comfort while your heart is being torn apart.

Although we wanted to inflict no pain, Steve suggested a small subcutaneous fluid treatment to perhaps hydrate and ease the passage. Her little body greedily soaked in the fluids and her breathing did get better.

About fifteen minutes later, Anya opened her eyes and although she is blind, she seemed aware for the first time of where she was. It felt like she was actually fighting a bit to come back.

I called our beloved vet. She wasn't in yet but everyone there agreed that it sounded like Anya was indeed dying. An hour later, Dr. Julia called with Yo's blood work (he is stable not yet back to normal but no worse). I told her Anya was dying and what had happened.

She knows that we believe in no extraordinary measures at end of life but she said "It might be Addison's do you feel like she can be moved? If so bring her in right now."

If there was any chance that my girl could be brought back, we would take it. We bundled Anya into blankets and rushed to Dr. Julia. She took her immediately in the back and came out 5 minutes later. "She has either pancreatitis or toxic gastrointestinitiis. I am going to put her on an IV and give her some antibiotics. She IS pretty bad," our vet conceded, "And I am not making any promises but I will call you and then you can pick her up for the night if all goes well and bring her back in the morning."

Turns out Dr. Julia was there only to look at her desk and Yo's work. She had been injured and was still recovering from bruised ribs and torn ligaments. I thanked the Universe.

She called me and I was prepared for the worst by her tone. "I have never seen anything like it," she said. "Anya went into angular breathing a sure sign of the end. I administered a stimulant and did CPR and her heart stopped. But then there was a tiny beat that began. So I administered another dose and continued. Again her heart stopped. I know how you feel about end of life so I was preparing to call it the end. Suddenly her heart began beating full force and she opened her eyes. I have never seen anything like it."  Clearly Anya is not sure that she wants to leave us yet I speculated. It was so similar to what had happened at home.

"She is on the IV now and I have administered the drugs and a steroid she needs. If she lives, because I have to tell you she is not out of the woods. Have Steve pick her up at 5; and then again, if she makes it through the night, bring her back in the morning and we will reassess and continue treatment. It is up to her at this point." I thanked her with tears rolling. "It is up to her and the power of love."
Posted by White Dog Blog at 3:44 PM

Hugs, love and prayers to that dear girl from all of us. She sure is loved and we know she knows that.

OMD.....We're sending love, hugs, and lots of POTP for sweet Anya to be able to fight her way through this.

Seems she's not quite ready to let go and leave all your love.

24 Paws crossed for Anya and all your family.

We will be thinking about you.

So much love and so many purrs and prayers coming your way, for Anya, and for all of you.

She knows. And you are letting her tell you. Bless you all

The Ladies of Beaglebratz Manor said...

Mom Kim here-just wondering if there are any new updates? I understand that right now, your mind is elsewhere as it should be. I am keeping up the prayers and POTP for sweet Anya. I know that you are doing whatever you can and whatever is right for her.