White Dog curled herself in my lap and we both stared out of the window. The others restlessly stood at the door confused by Steve's taking Benson away and not returning.

I understood. It was only yesterday that we watched Anya fly away and this morning Benson was having medical issues.

BenBen has Stage 3 Kidney disease so his eating and hydration are major concerns in our house. When he did not eat last night, we took note but understood the day had been an unusually stressful one. He had his subq fluids and slept through the night. But when he did not eat this morning, refusing even water, and having trouble with his back legs, we feared the effects of dehydration and sent him off to the vet for blood work and a check over.

I was already talking to our vet when Steve called to tell me Benson would be staying all day there. Dr. England had explained that Benson's kidney numbers were somewhat elevated but that he had pancreatitis. He was going on IV fluids all day as medications were given. He could come home tonight and she hoped we would see some improvement in about 12-24 hours.

Benson being gone made the entire WDA VERY ill at ease.

When Steve went to pick up our boy at six, the doctor was a little uncomfortable with the lack of response; she had anticipated a quicker bounce back. He goes back tomorrow to repeat the cycle with hopes that we will see improvement with a return to eating and normal walking by Friday morning. If not we will start to look for more catastrophic reasons for the pancreas numbers and leg trouble.

I don't even want to consider THOSE possibilities. Taiko had pancreatic cancer and we know how painful and fast progressing it is. I am simply not prepared to walk that road right now.

Benson melted into my arms and fell asleep when Steve brought him home. I held him long past my arms going numb and poured love and strength into my very special boy who is so devoted to me. Eventually Steve took Benson and laid him on his mattress.

We woke him to take meds after dinner and tucked him comfortably in his crate where he now slumbers.  Tomorrow we will wake up and try again. 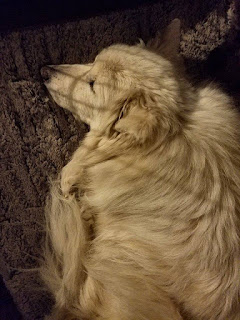 I cried reading this and I only very recently found your blog. Know that you are in my family's thoughts and prayers in the coming days. Our "white dogs" are my tiny granddaughter's gentle giants the Great Pyrenees. We have a black lab mix rescue. All are deeply loved and will be deeply mourned when they cross t the Bridge. Hold close the memories.

The Johnsons and Abby Lab

Sorry - I was signed in on my professional blog. The Johnsons's are at www.thebookofbarkley.blogspot.com, part of the POTP blog group.

oh geez.....we are sending lots of purrs and healing thoughts to all of you

I agree with the Army, it is not fair at all.

Buy metrovac pet dryer and for other animals. Speedy dog grooming dryer are built in the USA with high-quality components and all metal housing. Unlike plastic dryers, they will not melt or crack.