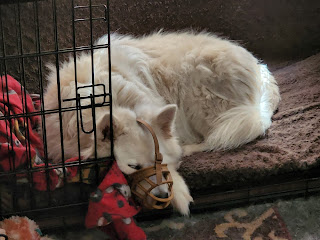 "Roman is frightened," Opal told me. "The rain from earlier is gone and it was very gentle so it cannot be the cause. He won't tell me."

I looked over at him, smiled, and softly asked if I could help his sister to understand. "you are safe even from hurricanes and will never be abandoned again," I began before turning to Opal.

"It is not that he won't tell; it is fear deeply buried that he has no words to explain. Roman is an amazing survivor. You watched the news s with me this morning and saw the horrible winds and lashing nonstop rain. High water covers everything and is filled with hidden dangers. Roman lived through a hurricane in Texas.

"He lost his people and found himself in the worst of that hurricane's trauma. Sometime during his misadventure Roman's leg was broken; and no one was there to get him treatment, He had to survive using only t5hree legs...and it had to pain him. For more than seven months Roman lived in the destruction and was forced beyond familiar places.  He had to forage for food and sometimes had to fight other wild ones who tried to hurt him.

:"Roman grew to distrust everything, even humans so it took a long time to rescue him and bring him to safety.  You remember how thin and confused he was when he joined The White Dog Army? Living through that catastrophe scarred him deep in his soul.

"Big storms remind Roman of that and watching the news of Florida's hurricane dredged up those horrible memories." I looked away from Opal to discover the entire Army gathered, listening, in the doorway.

"We all came in to rest here with Roman to let him know he is not alone and we will keep him safe," Zsofia said as they filed in.

What a wonderful family you have raised.

Peace and love little friend, we are with you,

Oh my! What a brave little soul you are Roman. ♥ Our hearts are with you. THank you for sharing Roman's story...
+