White Dog slowly and deliberately turned her head to look at the one wooing; that was enough to stop the complaints mid-sentence.

Zsofia was in the middle of crying on Opal's shoulder over the severity of the punishment she and Bailey faced throughout the day as a result of their altercation on last night's walk.

"First dad wakes me up during my pre-brekfast nap and dresses me to go on a walk. Cool, I think. But no, Bai must watch out of the window while I go alone out into the neighborhood Then it isn't even a walk; it's a freaking TRAINING session to practice LEAVE IT! Before breakfast! And therer he is, dad dropping the best salmon treats and letting me get close enough to sniff before telling me to leave it  and dragging me away...just leaving it on the sidewalk for some stranger to eat. And he made me walk at a heel...around the entire block. He must of left 25 treats behind."

"Same with me," Bailey chimed in. "And when I didn't heel, he shortened the lead and he was RUDE pulling me off the treats."

"And momma was just as bad." Zso continued. "She made Bailey and I sit right next to each other until she said we could go." "Don't forget SHE also made us play LEAVE IT and she sounds way more serious than dad ever does."

"I think they are really over-reacting to a little blood and gnashing; kind of makes me wonder what is in store tonight. I heard momma telling dad that if there is even a HINT of meanness muzzles are next." 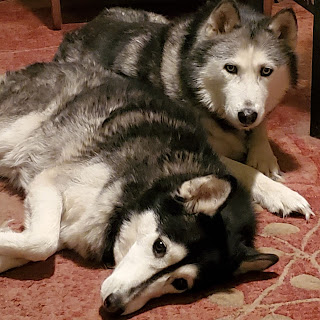 Mom and Dad love you girls very much. They just want to make sure these kinds of disagreements don't happen again. XO