She stomped in and sat sullenly at my feet. "How come Roman gets to always be Dad's kitchen helper?" Diva asked. "Dad is doing some crazy stuff and he won't let me in to help." 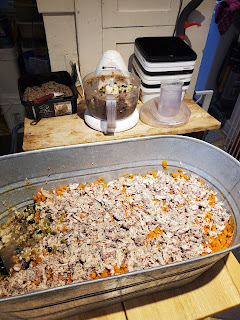 I smiled. "He is making meals for the White Dog Army," I told her. "When he is done this afternoon you will have meals for a month in the freezer so at dinnertime Dad just has to serve it up." 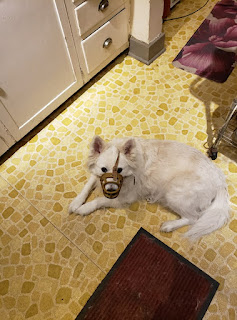 "But how come he won't let me into help.?" "Sweet Girl, there are a couple of reasons."
"One, you are small and would be a workplace hazard for tripping dad as he carries bowls, moves around to chop things, and such. Things could be spilled on you. You would be underfoot." "But Roman..." I stopped her. "Roman is much bigger than you and he knows where to sit and watch where he is not in the flow of production. He has helped for a very long time."
"It smells SO good," Diva yipped. "I know," I agreed. "And that is the second reason. Dad wants to efficiently cook and he can't get things done if he is constantly stopping and handing out samples to the chef's assistants. He has a policy that when he is done, EVERY pup gets to sample the results; not even Roman gets bites before then (I did not mention the clean up things dropped clause of Roman's contract)"
"I hate being away from Dad," Diva confessed. "I do not like it when I cannot be next to him." "I know, D, but it is not really being away from him if you sit on the other side of the kitchen gate where he is just steps away and you can watch everything that goes on. Go and sit on the orange rug and observe; if nothing else it will help you appreciate how much love dad puts into your meals." 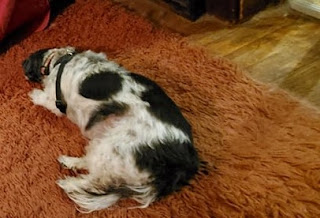 "After all that," Roman said, "Diva took your advice about the rug by the kitchen gate...only she took a nap."
Posted by White Dog Blog at 10:08 PM