It was not until nearly dawn that Roman felt safe going out to the yard to take care of business. Until then the noise sounded like an invasion and was loud...so loud that Roman melted into a quaking wide eyed wretch just trying to be invisible. And even Zsofia who is not usually affected, was whimpering with her head buried under my arm.

Thankfully Jackie instantly made room for Roman on our vet's schedule. "Poor Roman, it must have been torture for him." "He is a hot mess," I told her, "you are going to need strong magic to convince him to cooperate" "If we need to," she replied, "we will use a little gas to relax him."

Steve took Roman over right away and the decision was made to leave Roman with our healing team and come back for him. The thought was to give him some time to settle after the car ride thus allowing time to watch for just the right moment before physically attempting a remuzzle.

When Cindy, Dr. Julia's Number One, called early afternoon the new muzzle had been put on but anesthesia did prove necessary. "All of my kiddos were over the top anxious with the fireworks, too," she told Steve. "And they went on until almost three. Poor Roman with his issues."

"You can come and pick him up mid afternoon," Cindy said. "And while we had him under Doctor took the time to give him a once over. His bad leg seems to be worse for the wear so he is going to be on vetprofin and gabapentin to manage pain. It is not going to get better but hopefully this combo will at least keep him from hurting." 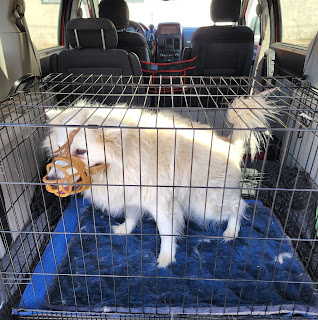